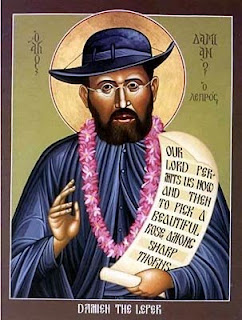 So, did any of you catch the 20/20 episode that aired a couple nights ago? Wasn’t it FASCINATING!? It was about miracles, and just so happened to be right on time for Easter weekend! One of the profiles featured on the episode involved a woman named Audrey Tugochi, a retired school teacher who was diagnosed with a rare form of cancer called Liposarcoma, a cancer that arises in the fat cells of our body. Upon diagnosis, she was instructed to start chemotherapy but refused and instead, opted to pray to Father Damien De Veuster.

This is probably an appropriate time for a little history lesson. Father Damien De Veuster was a Belgian priest known for his work with leprosy patients in Kalaupapa of Molokai Island in Hawaii. It was an island where lepers were basically shipped and banned to for fear of contamination. Father Damien was the first to go to this island voluntarily, knowing full well that he would contract leprosy. While experimenting on himself for possible cures, Father Damien died of the disease in Molokai in 1889.

Now, back to Ms. Tugochi. Without any chemotherapy or other treatment, except that of faith, Audrey’s cancer receded and completely disappeared. Umm…WHAT?! Turns out I wasn’t suffering from premature hearing deficiencies because I had heard that correctly. Disappeared. Amazing. The Vatican later concluded that this was an official miracle, leading to the canonization of Father Damien, or rather, Saint Damien. Now, this is by NO means, an easy task. There are very, very strict and rigorous guidelines that the Vatican undergoes before officially labeling an event as an official “miracle” and canonizing an individual.

For an event to be recognized as an official miracle, a team of doctors and experts (not necessarily catholic, but the most qualified) chosen by the Vatican are hired to examine cases deemed as miracles. In addition to this, the Vatican also enlists what is called an “advocatus diaboli”, or in popular terms, a Devil’s Advocate, to present reasonable facts against the case and promote the “truth”, whatever that may be. Or, as Michael Shermer, head of the American Skeptics Society states, be “Mr.Skeptic”. The criteria that these individuals use for a confirmed and official miracle state that the miracle be: Lasting, Perfect, Instantaneous, and Scientifically Inexplicable. In order for an individual to be canonized as a saint, there must be proof of the intercession of at least two miracles by said individual. Interestingly enough, canonization does not make someone a saint. Rather, it is only a declaration that the person is a saint and was a saint even before canonization. So basically, it is a process of recognition, not certification.

I’m not a hardcore follower or anything, but I do believe and have faith in Christianity. Whether or not you believe in the same higher power as myself, I do think that believing and having faith in something is important. For many of us, it gives us something that sometimes science and medicine cannot. Hope. The closing segment of the episode put it nicely. “and yet the overwhelming belief of miracles persist. Perhaps it is only human to yearn for something more powerful, something to save us or the people we love in our times of need. For those who do know, these modern miracles are part of faith that has sustained them”.

The following are links to the 20/20 episode and a newspaper article that featured Audrey Tugochi’s miraculous recovery.

I was reading the paper today while we were in for treatment and just so happened to discover that the National Post also did a piece similar to the one featured on 20/20. Ch-Ch-Check It Out!

L
Edmonton, AB, Canada
Just a guy wanting to share his knowledge, concerns, and experiences with others who are affected by cancer. Wanna chat? Email me at thecancerdiaries@live.com